South African musician, music therapist and humanitarian, Sharon Katz, was born in Port Elizabeth, South Africa, during the Apartheid era, and spent her teenage years going illegally to black townships near her home to visit activists and actors, like her friend John Kani, now world famous for his Tony Awards and roles in hit movies like “Black Panther”. Sharon acquired a Master’s Degree in Music Therapy from Temple University in Philadelphia, and after working in the prisons, schools  and mental health programs of Philadelphia, in 1992, when South Africa was on the verge of transition from Apartheid to the new Democracy under the leadership of Nelson Mandela, Sharon returned home to South Africa and created a 500 voice multi-cultural choir to perform and spread a message of unity in the country.  They subsequently performed for Nelson Mandela and went on to travel around South Africa with 150 singers and musicians on a train which they called, “The Peace Train”, living together and performing Sharon’s original musical production to help prepare the country for peaceful elections. Since the first ride of The Peace Train across South Africa in 1993, Sharon has continued spreading a message of peace and reconciliation around the world through performances, seminars, workshops, residencies and cultural collaborations. In 2015, a documentary, “When Voices Meet” was released, telling the story of “The Peace Train” through the words of the youth and families who were participants in the project.  Through archival footage and the words of the youth, now adults 20 years later, as well as the musicians and other South African personalities, this documentary was expertly crafted and went on to receive numerous awards at the over 30 film festivals around the world and has been shown in 47 countries in Africa. The film is available on Amazon Prime and on DVD. 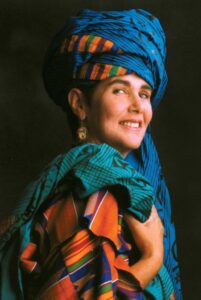 Sharon travels the world presenting her model of music and social change, performing, recording, directing productions and cultural exchange projects, and leads experiential workshops incorporating South African songs and dances and her orchestrations, compositions and arrangements of music. Since 2018, her groundbreaking project “The Peace Train Transcending Barriers” has joined together families, musicians and singers from the USA, Mexico, Cuba and South Africa.  Just back from performing The Peace Train Concert with 250 Cuban youth, symphony orchestra and band in Santiago de Cuba in November 2019, Sharon is currently based in Tijuana, Mexico, organizing an extraordinary musical collaboration when musicians, singers and families from USA & Mexico will ride together in Mexico on The Peace Train Oct 9-12, 2020.

Sharon performs widely with her band, “Sharon Katz & The Peace Train” and has numerous CD’s and DVD’s available on cdbaby.com Her songs are on Putumayo compilations, and on the “Carnival” CD with Sting, Tina Turner, Elton John & Madonna.

Sharon received the 2019 Phil Ochs “Music for Political and Social Change” Award, and Sharon and Marilyn Cohen, Manager of The Peace Train Projects since its inception, received the 2016 Kristin Lems “Change Through Music Award” from the National Women’s Music Festival.

Sharon Katz & The Peace Train use proceeds from their appearances for their humanitarian work in under-developed areas of South Africa and around the world including music therapy with orphans and communities affected by HIV/AIDS; feeding programs in impoverished areas; conflict resolution in violence-torn regions; building schools and community arts centers; and promoting social justice.