Singer-songwriter-parking lot attendant Jamie Anderson has played her unique original songs in hundreds of venues in four countries including forty-seven US states. Proficient on guitar, ukulele and mandolin, this musician with an expressive soprano is folk without the Birkenstocks, country without the big hair, pop without the meat dress, and jazz without the weird chords. Her eleven recordings include the 2019 release The Truth Appears. Jamie loves being a musician, so she doesn’t really park cars, but her mama said she should have something to fall back on.

The Truth Appears was recorded in Quebec with engineer and co-producer James Stephens (Ian Tamblyn, Lynn Miles) and some of the area’s finest musicians, from Ken Kanwisher on bass and piano (Charlie Major) to Chris MacLean on backing vocals. This collection of seventeen originals includes “Between,” a poignant pop/folk song about the gray area between the lines of a relationship. She wrote “Blah Blah” when she needed a folk tune that’s an easy singalong (the chorus is simply “Blah, blah, blah …”). Using stark winter images “Home to Me” explores a breakup. There’s an island beat in “Karma Café” where she muses about what one would find there if your karma was bad – roasted crow, sour grapes and just desserts. The jazz-flavored “Yes” is a sultry love song. “Man in Black” is a lively bluegrass piece about the time Johnny Cash came to fix her furnace. Or rather, someone dressed all in black who could’ve sung a convincing “Ring of Fire.” Her cat wrote “A Very Sad Tail” and threatened to shred the furniture if Jamie didn’t record this dramatic piano-centered piece.

Jamie started releasing albums in the late eighties, selling thousands of albums at a time before YouTube and iTunes. She jokes that she’s easily bored so this genre hopping singer-songwriter has recorded just about every style except opera and only because it’s usually in German or Italian.

Jamie’s dad was a country musician, a painful thing for a teenager who would rather listen to Carole King, but it did mean there were always guitars lying around the house. In high school she memorized every chord in a Mel Bay songbook, and for the next few years played local coffeehouses and weddings. After the hundredth request for “Wedding Song,” she decided to write her own songs. She recorded her first release while still a broke college student, with money donated by a woman who heard her at an open mic. Jamie did her first national tour in 1987 because she needed to earn gas money to get to a music festival. She’s been collecting tiny motel soaps ever since. 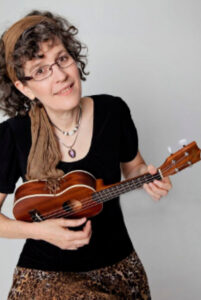 In addition to solo shows, Jamie’s performing with Deidre McCalla and Dianne Davidson as “We Aren’t Dead Yet.” It’s a party on stage, with solo and ensemble performances.

Laughter is a big part of Jamie’s live performance. Her offbeat song intros and stories help keep the performance fun, but don’t be surprised when she delves into more serious issues. She’s emceed at many events and she can hula hoop while playing the ukulele. When Jamie isn’t touring, she’s taught music classes at Duke University, arts centers, festivals, and her studio. One of her guitar instructional videos has gone viral, with over 400,000 views. See it here.

Jamie’s also an author. Her memoir, Drive All Night, was published in 2014. Her second book, An Army of Lovers: Women’s Music of the Seventies and Eighties, will be out on Bella Books in the fall of 2019. Her extensive writing credits include book chapters, articles and CD reviews in Acoustic Guitar, Curve, SingOut! and more.

Awards include finalist in non-fiction for Drive All Night (GCLS 2015), Best Jazz Song from RightOutTV (2014), the Jane Schliessman Award for Outstanding Contributions to Women’s Music (Women in the Arts, 2006), and others that only her mama cares about.

Jamie’s expressive voice and personable stage manner are an asset to any stage. She’s legally blind in one eye so you really don’t want to hand over the keys to your Volvo … although, with enough chocolate, she’ll consider it. Make sure your insurance is up-to-date.