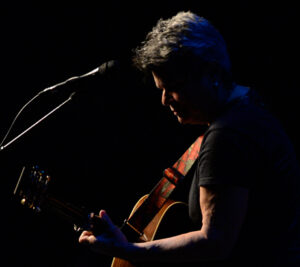 Tret Fure began her career at the age of 16, singing in coffeehouses and campuses in the Midwest. At 19, she moved to LA in hopes of obtaining a record deal. Within a year she was performing as guitarist and vocalist for Spencer Davis, touring with him and penning the single for his album “Mousetrap”. She went on to record her own album “Tret Fure” in 1973, on MCA/UNI Records, with the late Lowell George of Little Feat as her producer. With the success of that release, she opened for such bands as Yes, Poco, and the J Geils Band.
A prolific artist in the contemporary singer-songwriter arena, Tret Fure has released 17 albums and CDs over the course of her 51 year career. In addition to being a gifted songwriter, Fure has engineered and produced countless recordings by a variety of artists, including her own work.
In the early 80s, Tret moved to the independent side of the industry discovering the blossoming genre known as Women’s Music. She recorded with and produced some of the best of women’s music including mixing the legendary “Meg & Cris at Carnegie Hall” (1983). She worked as a duo with Cris Williamson throughout the 90s, producing, engineering and releasing 3 CDs together. Now after 9 acoustic releases on her own label, “Tomboy girl Records”, she has re-established herself in the folk world
Some highlights from her career include:
1990 – Voted both Best Guitarist and Best Engineer in a Reader’s Choice poll in “Hot Wire: The Journal of Women’sMusic & Culture”.
2004 – Winner of the South Florida Folk Festival Singer/Songwriter Competition in 2 out of 3 categories, Best Overall and Best Up-Tempo Song.
2004 – Winner of the Women in the Arts “Jane Schliessman Award” for Outstanding Contributions to Women’s Music.
2009 -Voted “Pride In The Arts” Favorite Female/Lesbian Musician.
2009 – Winner of the Women in the Arts “Janine C Rae Award” for the Advancement of Women’s Culture.